Featured Author of the Month: 'Helene Wecker' The Golem and the Jinni

Featured Author of the Month: 'Helene Wecker' The Golem and the Jinni 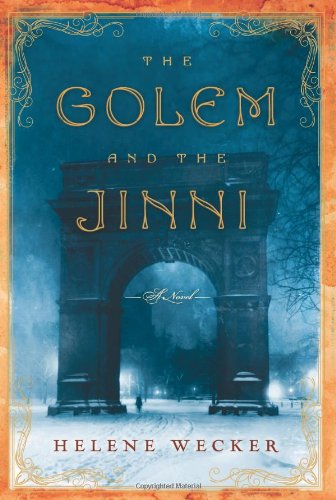 Featured Author of the Month: 'Helene Wecker' May 2013

The Golem and the Jinni: A Novel [Hardcover]
By: Helene Wecker

An imaginative journey through a mythical blend of culture and fantasy. Wecker has created an extraordinary tale that is anything but ordinary. ~ScreenRave

In The Golem and the Jinni, a chance meeting between mythical beings takes readers on a dazzling journey through cultures in turn-of-the-century New York.

Chava is a golem, a creature made of clay, brought to life to by a disgraced rabbi who dabbles in dark Kabbalistic magic and dies at sea on the voyage from Poland. Chava is unmoored and adrift as the ship arrives in New York harbor in 1899.

Ahmad is a jinni, a being of fire born in the ancient Syrian desert, trapped in an old copper flask, and released in New York City, though still not entirely free

Ahmad and Chava become unlikely friends and soul mates with a mystical connection. Marvelous and compulsively readable, Helene Wecker's debut novel The Golem and the Jinni weaves strands of Yiddish and Middle Eastern literature, historical fiction and magical fable, into a wondrously inventive and unforgettable tale.

(An Amazon Best Book of the Month, April 2013)
Imaginative and meticulously researched, this enchanting debut novel from Helene Wecker is, in reality, an historical fiction. Set primarily in turn-of-the-century Manhattan, it deliberately details the immigrant experience--the wonders and hardships of being in a new country and the discoveries, triumphs, and failures that follow--while bringing the city itself to life with such passion that New York of yore seems like a magical land. Beyond reality, however, The Golem and the Jinni, as the title implies, is also a fantastic work of fantasy. The Golem is an insatiably curious clay "woman" that was created to seem human while serving only her husband; the Jinni is a magical "man" whose fascination with mortals has left him nearly stripped of his own nature and forced to live as one. These mythical characters from otherwise clashing cultures not only coexist, but come to rely upon one another in order to exist at all. In turn, their story finds us not only rooting for them to find peace and happiness, but gaining a better understanding of our own human nature in the process. --Robin A. Rothman

Helene Wecker grew up in Libertyville, Illinois, a small town north of Chicago, and received her Bachelor's in English from Carleton College in Minnesota. After graduating, she worked a number of marketing and communications jobs in Minneapolis and Seattle before deciding she wanted to write something longer than a press release. Accordingly, she moved to New York to pursue a Master's in fiction writing at Columbia University. She now lives near San Francisco with her husband and daughter. Her first novel, THE GOLEM AND THE JINNI, was published in April 2013 by HarperCollins.