Featured Author of the Month: 'James Patterson' 12th of Never

Featured Author of the Month: 'James Patterson' 12th of Never 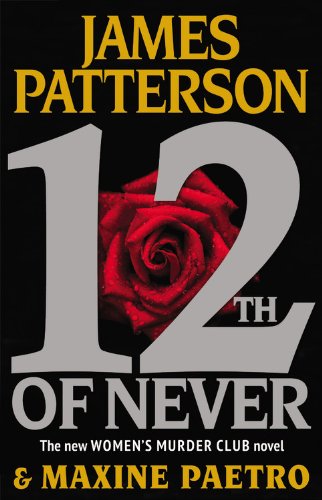 It's finally time! Detective Lindsay Boxer is in labor--while two killers are on the loose. This title will be released on April 29, 2013.

Lindsay Boxer's beautiful baby is born! But after only a week at home with her new daughter, Lindsay is forced to return to work to face two of the biggest cases of her career.

A rising star football player for the San Francisco 49ers is the prime suspect in a grisly murder. At the same time, Lindsay is confronted with the strangest story she's ever heard: An eccentric English professor has been having vivid nightmares about a violent murder and he's convinced is real. Lindsay doesn't believe him, but then a shooting is called in-and it fits the professor's description to the last detail.

Lindsay doesn't have much time to stop a terrifying future from unfolding. But all the crimes in the world seem like nothing when Lindsay is suddenly faced with the possibility of the most devastating loss of her life.

"Those who haven't read any of the novels in the Women's Murder Club series are cheating themselves." (BookReporter.com )

"I can't believe how good Patterson is....He is always on the mark. I have never begun a Patterson book and been able to put it down." (Larry King, USA Today )

"Patterson and co-author Paetro spin a fast-paced triple mystery that expertly weaves the stories together. It is the distinct yet complementary personalities of the WMC members that make the story's heart beat." (Library Journal )

About the Author
James Patterson has had more New York Times bestsellers than any other writer, ever, according to Guinness World Records. Since his first novel won the Edgar Award in 1977 James Patterson's books have sold more than 240 million copies. He is the author of the Alex Cross novels, the most popular detective series of the past twenty-five years, including Kiss the Girls and Along Came a Spider. Mr. Patterson also writes the bestselling Women's Murder Club novels, set in San Francisco, and the top-selling New York detective series of all time, featuring Detective Michael Bennett. He writes full-time and lives in Florida with his family.